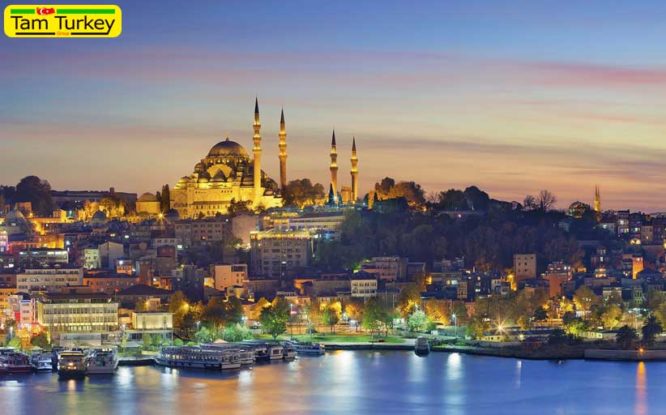 Useful information about the city of Istanbul, Turkey

Istanbul is the largest city of Turkey and its cultural and economic center. This city is located next to the Bosphorus Strait and the Sea of ​​Marmara. The Bosphorus strait separates the two continents of Asia and Europe, and Istanbul is the only big city in the world that is located on two continents. The natural port of Golden Horn or Gulf is located in this city. Istanbul is also the fourth largest city in the world with a population of 14.6 million people, so it is considered a mega city in the urban divisions of Istanbul.

Nowruz is a spring festival, which is usually celebrated on the first of April and is a kind of welcome to the spring season. Local people celebrate Nowruz in large squares and all over Turkey. Celebrations often include bonfires, folk dancing and singing. 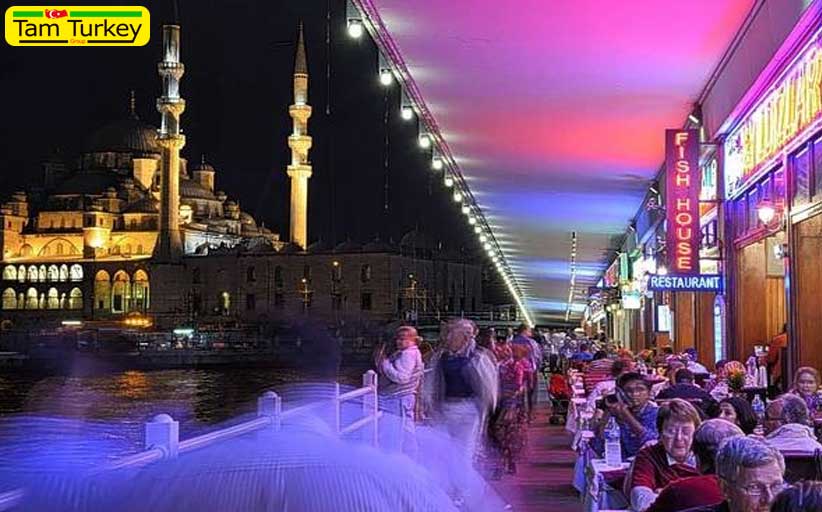 Istanbul is the largest city of Turkey and its cultural and economic center. This city is the first destination of many Iranians. Istanbul is divided into two European and Asian parts, which are connected to each other through the Bosphorus Strait and the Sultan Fatih Ahmed Bridge.

Buy a property or house in Istanbul

The best time to travel to Istanbul is spring and autumn. The city of Istanbul has a lot of history, but most Iranian travelers travel to it for entertainment, business and shopping. Its historical and beautiful places include Hagia Sophia Mosque, Blue Mosque, Sulaymaniyah Mosque, Topkapi Museum, Basilica Cistern, Hippodrome, Istanbul Archeology Museum, etc. 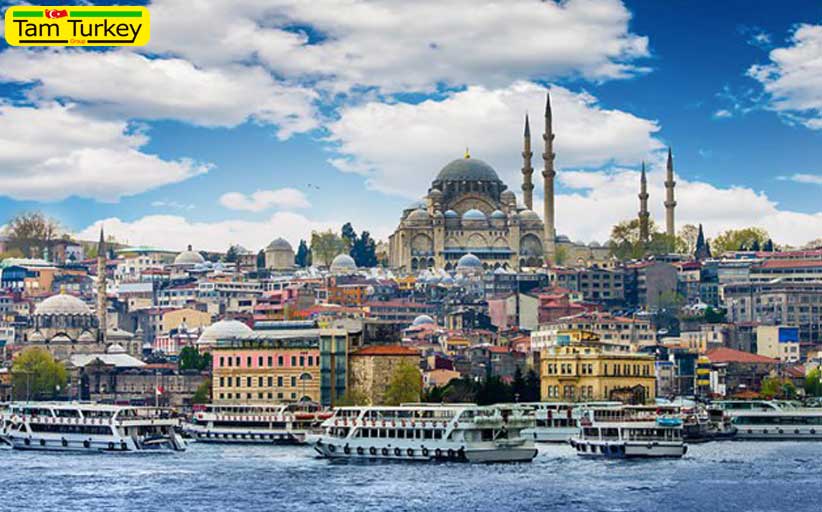 Istanbul, with its many shopping centers, is very popular among all those interested in shopping in the world. Esteghlal Street of Turkey is one of the modern and busy streets that, in addition to shopping centers, has many restaurants and cafes. The area around this street has many churches and old office buildings that give it a beautiful view.

It also starts from Taksim Square, Jomohri Street, around which there are many restaurants, shops, hotels and tourist centers. In order to be able to access the tourist attractions of Istanbul Brahi.

The best place to stay is the old part of Istanbul or Sultanahmet. In this place, due to the abundance of public transportation, you will have no problem going to other parts of the city. Of course, another popular place to stay in Istanbul is Taksim Square. 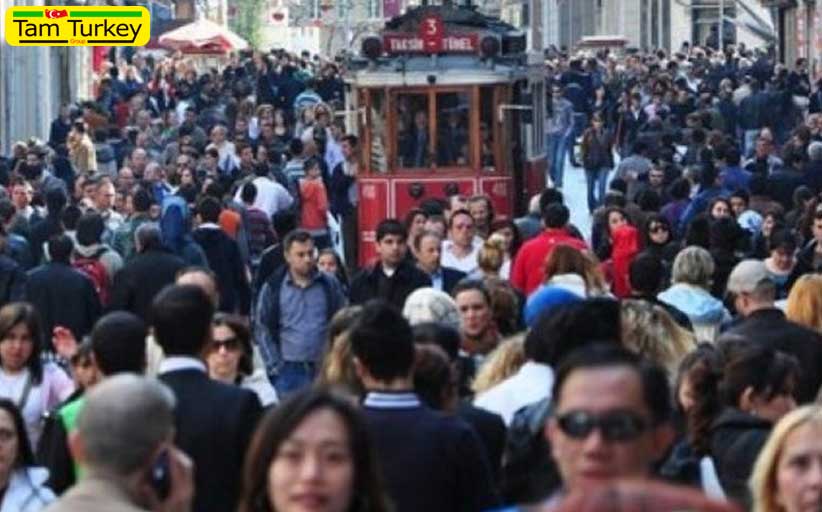 Geographical location and information of the city of Istanbul :

Istanbul, formerly known as Constantinople, is the largest city in Turkey and the fifth largest city in the world. This city is the only city in the world that is located in two continents, Asia and Europe. The Bosphorus strait, which is the narrowest strait in the world, is about 30 kilometers wide and 700 meters long and is located in the northwest of Turkey. This strait divides Istanbul into two parts, its western part is in Europe and its eastern part is in Asia.

Since the city of Istanbul is located near the North Anatolian fault, severe earthquakes have occurred in this city until now.

The old part of Istanbul is built on seven hills, all of which are between the defensive walls of the city. The highest of them is Kamelia Hill, which is called Jamlika Tepsi in Turkish, and its height is 267 meters above sea level.
The districts of Istanbul are divided into three main districts. The historical peninsula of Istanbul, which includes the districts of Aminonu and Fatih and is located in the southern part of the Golden Horn, the historical areas of Beyolu and Beşiktaş, which are located in the northern part of the Golden Horn, and Uskudar and Kadıköy, which are in the Asian part. 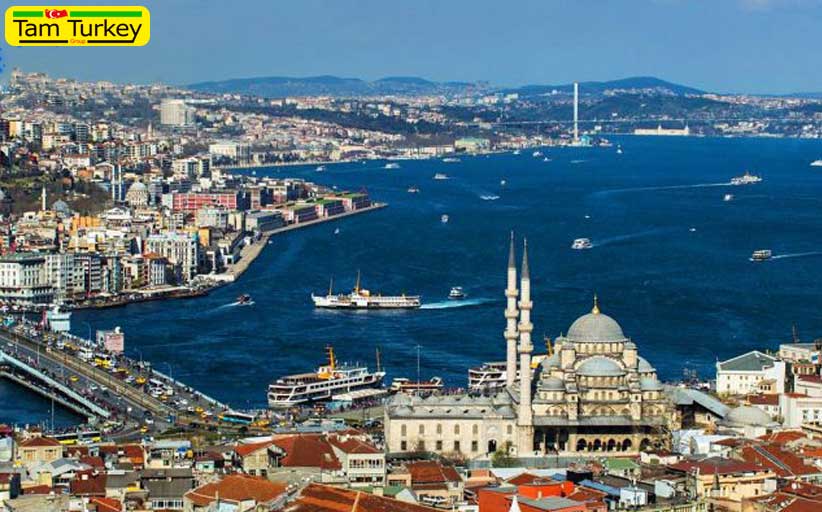 According to the statistics obtained at the end of 2014, the population of Istanbul and its suburbs is 14 million and 30 thousand people. 65% of this population lives in the European part and 35% in the Asian part. During the last forty years, the population of this city has increased about five times. The geographical, historical and economic location of this city is the reason for the migration of many people from Asia, Europe and Africa.

According to Köppen’s climate classification system, Istanbul has borderline Mediterranean climate, humid subtropical climate, and oceanic climate. This is due to the geographical location and extent of this city.

In general, the summers of Istanbul are hot and humid and the winters are cold, rainy and snowy. The average annual rainfall in this city is 870 mm, and the temperature is below zero degrees for about 30 days in winter.

Snow stays on the ground for several days after each rain due to the cold weather. The amount of humidity in Istanbul is often high and on average 228 degrees are seen in the morning of May, among which winter days are the most foggy days. Istanbul is somewhat windy and the average wind speed is about 17 km. 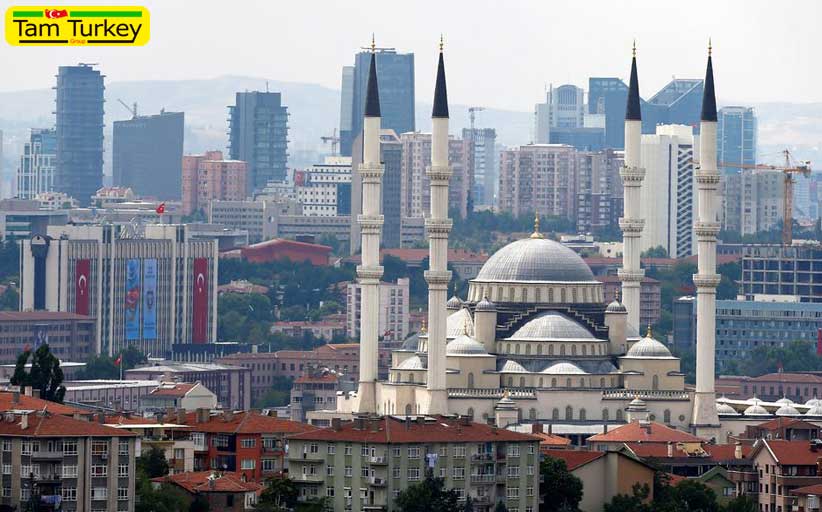 After the discovery of Neolithic artifacts in the early 21st century by archaeologists, the first signs of human habitation date back to before the 7th millennium in the historical peninsula of Istanbul. These residents who belonged to the Bronze Age lived in Fikirtepe, which is located in the Asian part of Istanbul. Also, there are signs of the Phoenicians’ settlement in Kadikoi area.
Istanbul was founded by Greek immigrants from the city of Megara in 667 BC and named it Byzantium in honor of their king Byzas. During the Achaemenid wars with the Greeks, Darius the Great captured this city, and before the Roman Empire dominated this city, the Iranians ruled it.
In 395 AD, Constantine the Great chose this city as his capital due to its location in Souq al-Jishi, and after that, Byzantium became the capital of the Eastern Roman Empire and was named New Rome. It was after his death that this city was called Constantinople.
Sultan Muhammad II Fatih was able to enter Constantinople after 53 days of siege in May 1453. His army created a hole in the city wall with their cannons to enter, which later became known as Topkapi, which means cannon gate. This is how Istanbul was conquered by Sultan Muhammad Fatih and became the third capital of the Ottoman Empire. Topkapi Palace, Istanbul Bazaar, as well as schools, baths and other famous buildings were built by the order of Sultan Mohammad Fatih, most of these buildings are masterpieces of architect Sinan.
After the collapse of the Ottoman Empire and the establishment of a republic in Turkey in 1923, the capital of this country was changed from Istanbul to Ankara. But Istanbul is still one of the most important historical, cultural and economic cities in Turkey.

Turkish cuisine is very diverse and famous in the world. Istanbul is like a melting pot of different cultures and this has a good effect on the taste of food. So while you are in Istanbul, forget fast food chain restaurants and try authentic Turkish food. Turkish flavors are cold appetizers that are very diverse and delicious. The most popular of these flavors are fried eggplant with tomato sauce, grilled eggplant salad, tandoori eggplant with yogurt, pinto beans, artichokes, pasta with spicy tomato sauce, and condensed yogurt with mint.

The main Turkish dishes are prepared from lamb, mutton, veal and chicken, of course, there are also a variety of seafood. The most common type of cooking is frying and baking, which includes the famous Turkish kebabs.

The most popular of these kebabs is doner kebab, which needs no introduction. The best kebab is Iskander kebab, which is thin slices of grilled meat or doner meat served on pizza-like bread with butter and tomato sauce. Adana is another delicious kebab that is pounded like kebab and is served in the same way, but with different spices, its taste is slightly different.

Piedeh, which is a Turkish pizza, is also very tasty and delicious, and its surface is filled with minced meat or shaved lamb. Manti is another dish that is also called Turkish ravioli. Manti is served warm with cold yogurt and garlic. Meatballs, burek, dolme and all kinds of dumplings are also very delicious and you are suggested to try them.

Among the desserts, we can mention baklava and kunefeh, which is a type of Arabic cheese pastry. The most famous Turkish drink is Turkish coffee, which is world famous. Other common Turkish drinks include ayran or buttermilk, turnip juice, which is often drunk with barbecue and can be eaten hot or spicy, and boza, which is a winter drink made from millet, semolina, water and sugar. and is considered one of the oldest Turkish drinks.

The Istanbul International Film Festival, which is held in April every year, aims to promote cinema and improve the quality of Turkish films in the cinema market. In this festival, the best ones are awarded with a golden tulip award.
The Fine Arts Festival is the biggest high school festival in Turkey, which is held every year in May at Robert College in Istanbul.
The International Jazz Music Festival is held every year in July with the participation of the most famous artists from all over the world by the Istanbul Culture and Art Institute.
International independent film festival. F. But more to the festival of F. Istanbul is famous for an annual film festival that takes place every year in the middle of February in a theater hall. F. M is held. This festival is dedicated to independent films from all over the world.
Istanbul International Music Festival, which is held every year in June and July, is a selection of European classical music, ballet, opera and traditional music with the participation of famous artists from all over the world 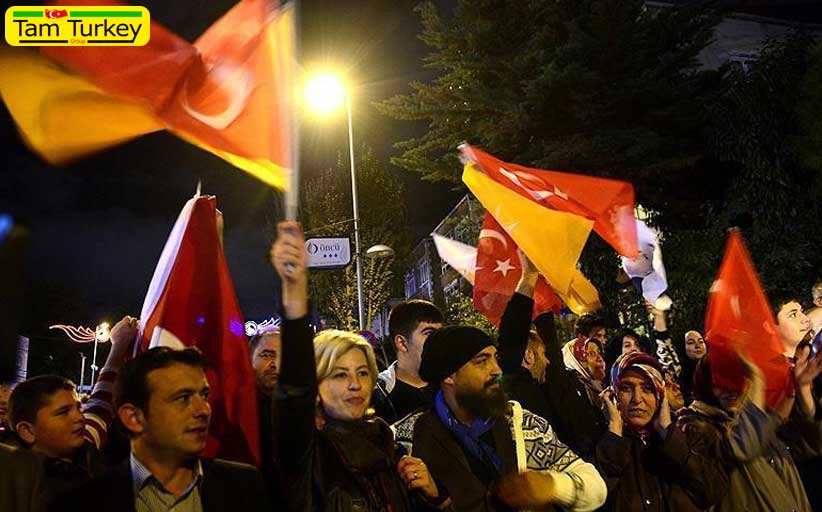 Are you planning to buy a property in Istanbul?
Get in touch with our consultants.
905522888939
Real estate sales consultant in Turkey Renting a house in Turkey
Contact via WhatsApp
WHATSAPP : https://wa.me/905522888939